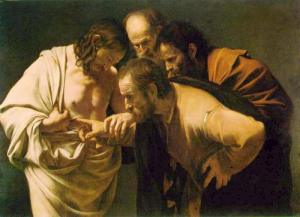 This year, more than ever before, I’ve been meditating on the forty days after Jesus’ resurrection.  Focusing on what Jesus DID and what He SAID to His followers during this time period yields significant take–aways for how we follow Jesus twenty centuries later.

In spite of Jesus’ repeated revelations of His resurrected body, His followers persistently “doubted” and “refused to believe” (Mark 16:11).  Thomas, known as “the twin,” usually shoulders most of the shame for this community of confusion.

But the rest of Jesus’ followers share equally that blame.

Probably the most startling example is found within the context of what Christians affectionately call the “Great Commission” in Matthew 28 … “Go therefore and make disciples of all the nations …”  The preceding verses reveal the condition of His audience.

After more than three years of near–daily contact with Jesus, witnessing amazing miracles, hearing prophetic teachings … followed by more than a month of face–to–face encounters with the resurrected Jesus … and they’re wavering in their opinions of Him!  The root word for “doubtful” in the Greek language means “twice,” indicating they were having “second thoughts” about Him.  Incredible! … right? … but don’t we act the same way sometimes?

What makes the “Great Commission” great is not only the One Who does the commissioning, but those who get commissioned … doubters!

Matthew’s Gospel is no isolated text in this matter …

The apostle Paul gets it right in Romans 5:8 – “But God demonstrates His own love toward us, in that while we were yet sinners, Christ died for us.”  And then Jesus proceeds to commission us for His Kingdom purposes … even when we’re confused or doubtful.

Let’s face it … we may be confused about how God works in our world.  We may be hard–hearted toward matters of faith.  At times, we might even feel like following Jesus is “nonsense.”  But our doubts will never deter Jesus from accomplishing His purposes for our lives … IF we let Him.

2 thoughts on “Navigating 40 Days of Doubt”