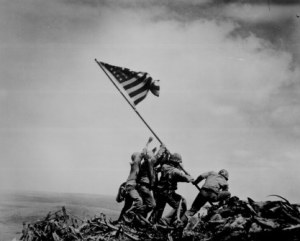 “Complacency kills”! … Those were the words spoken loudly in my living room four years ago during a men’s Bible study on the book of Revelation.  The brother–in–Christ who said them had served in Iraq and Afghanistan as a Recon Marine on several dangerous covert missions fighting terrorism.  He went on to share that just as complacency can be lethal on the military battlefield, spiritual complacency can be devastating to the Christian disciple intent on daily following in the footsteps of Jesus.

Today we memorialize the sacrifices made by men and women to secure the freedoms we enjoy as citizens of the United States.  It’s also a good day to remember the importance of remaining spiritually vigilant as followers of Jesus.

The term “complacent” derives from Latin, meaning “to take the fancy of” … to be pleased with oneself or one’s situation, often without awareness of potential danger or defect.

Jesus wrote a letter to the local church in the ancient city of Sardis (Revelation 3:1–6).  The city itself was a sort of parable used by Him to demonstrate the dire consequences of complacency.  More than 700 years before this letter was written, Sardis was one of the greatest cities in the world, capital of the Lydian empire.  Strategically located on a 1500–foot plateau, it became known for commerce and wealth.  Sardis claimed to have invented the process for dyeing wool, and became the center of that industry.  Legend has it that Midas left gold in the springs of Pactolus, the river that ran through the city.  Sardis was the first to mint gold and silver coins.

Sitting atop protective, precipitous cliffs, “capturing Sardis” became a saying for achieving the impossible.  Yet, on two occasions the city was conquered by stealth, largely because of the complacency of the city guards.

Jesus warns the members of the Sardis church, “I know your deeds, that you have a name that you are alive, but you are dead” (v. 1).  In other words, their “deeds” consisted solely of their reputation for vitality, but with no evidence to support it.  Like their city, these Christians had grown complacent in their life with Jesus.

To counter their complacency, Jesus employs five imperatives to call them (and us) to spiritual vigilance:

1. “wake up” (v. 2) [γρηγορέω] = to give strict attention to; be on the alert; literally, “show yourselves to be watchful.”  This strong phrase echoes similar warnings Jesus gave to His disciples regarding His future return to earth (Mark 13:33–37).

2. “strengthen” (v. 2) [στηρίζω] = literally, “stand something on its feet” … to make stable, place firmly, set fast, establish something by making it strong.  One of the best ways to achieve this kind of strengthening is within the context of community.  In fact, spiritual formation … growth in Christ–like character … occurs best within the context of community.  Another member of the same men’s Bible study once shared a proverb he learned in Rwanda while on a short–term missions trip: “If you want to go fast, go alone.  But if you want to go far, go with others.”

4. “keep” (v. 3) [τηρέω] = to attend to carefully; to hold fast; to guard.  Written as a present tense imperative, the term is commanding continual action.  This verb means not only to keep or guard, but also to actively obey.

5. “repent” (v. 3) [μετανοέω] = to change one’s mind.  This “global aorist” tense covers and summarizes the previous four imperatives.  In reality, when we wake up, strengthen, remember and keep, we will necessarily repent.  Once again, the apostle Paul shows the clear connection between “renewing the mind” and life transformation (Romans 12:2).

Jesus concludes His letter to Sardis with wonderful promises for the spiritually vigilant follower:

The “overcomer” is the person who refuses to rest on past achievements … who eschews complacency … who remains spiritually vigilant … and who refuses to accommodate his lifestyle to the surrounding pagan culture.

On a day when we remember those who sacrificed their lives to secure our nation’s freedoms, let’s also strive to remain spiritually vigilant as we follow the footsteps of the One Who died to secure our eternal freedom … Jesus!